I have suggested in previous posts (and explained clearly in my book ‘Roman Daze – La Dolce Vita for all Seasons‘), that Italians can often be neatly divided into two groups, in a variety of ways:

Now I want to introduce two new categories.  Those who prefer Panettone as a Christmas dessert v those who prefer Pandoro.  Both are delicious, sweet cakes and are eaten only at Christmas time.  They both come in highly decorative, large boxes (sometimes Panettone can come wrapped in brightly colored cellophane instead of a box).  They only come in one size (large) and will feed between 10 – 20 people, depending on the serving size.

Now some explanation about the difference.  Panettone is originally from Milan and is a high, airy dome of yellow fluffy goodness studded with candied orange peel, candied lemon peel and sultanas.  It takes many hours to make as the dough must rise and fall three times before it can be baked.  It is never attempted by home chefs and going out to buy the Panettone (or Pandoro) is a sacred Christmas ritual. 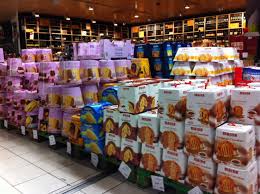 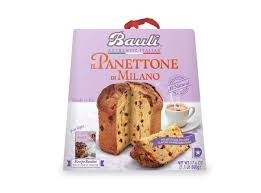 I must admit to being a bit disappointed when i first unwrapped a Panettone and cut into it.  Delivered of its smart, brightly colored box with ribbon handle it looked like a large brown rock and not very appetising.  Looking inside it looked a little plain to me and not worth all the hype and excitement surrounding it.  I was used to cream, brandy butter, and desserts that were alight with flames as part of my Christmas dessert, and this looked like it was going to be a bit of a let down in comparison.  But like much Italian food, the key is in the simplicity, and the quality of the ingredients, along with the seasonal approach to food which creates a longing and anticipation.

What looked like a door stop of a piece collapsed in my mouth into quite small mouthfuls as the dough was liberated from its airiness.  The tender, fluffy morsels were interspersed with just the right amount of sweet sultanas and slightly bitter peel.  Towards the bottom (my favourite bit), the dough became denser and more chewy.  A Panettone (like a Pandoro) is not served with a fork or spoon but is usually pulled apart with your fingers or held in your hand with a serviette and bit into.  Usually accompanied by a glass of prosecco. 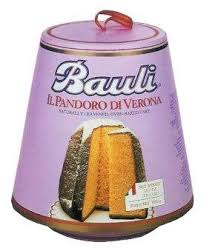 But what about the Pandoro?  Is there any room left for argument?  Plenty.  Pandoro comes from Verona originally and literally means  ‘Golden Bread’.  It is bread dough enhanced with lashings of eggs, butter and sugar.  It rises high and is in the shape of an 8-pointed star, dark golden on the outside and light gold on the inside.  It comes in a cellophane bag with a small packet of icing sugar.  Protocol requires that you keep the Pandoro inside the cellophane bag and sprinkle the icing sugar over it.  You then hold the bag tightly at one end and shake it therefore dusting the entire Pandoro evenly with the icing sugar.  You need to do this just before serving it as the moist outside will quickly absorb the sugar.  It looks like a Christmas wonder, all tall and dusted in white.  This is eaten in the same way and at the same time as a Panettone.  Now can you see the dilemma?  Luckily for me I love Panettone and my husband loves Pandoro so we always have to have one of each! 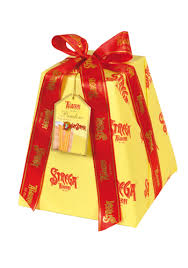 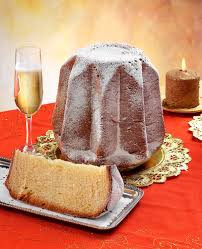